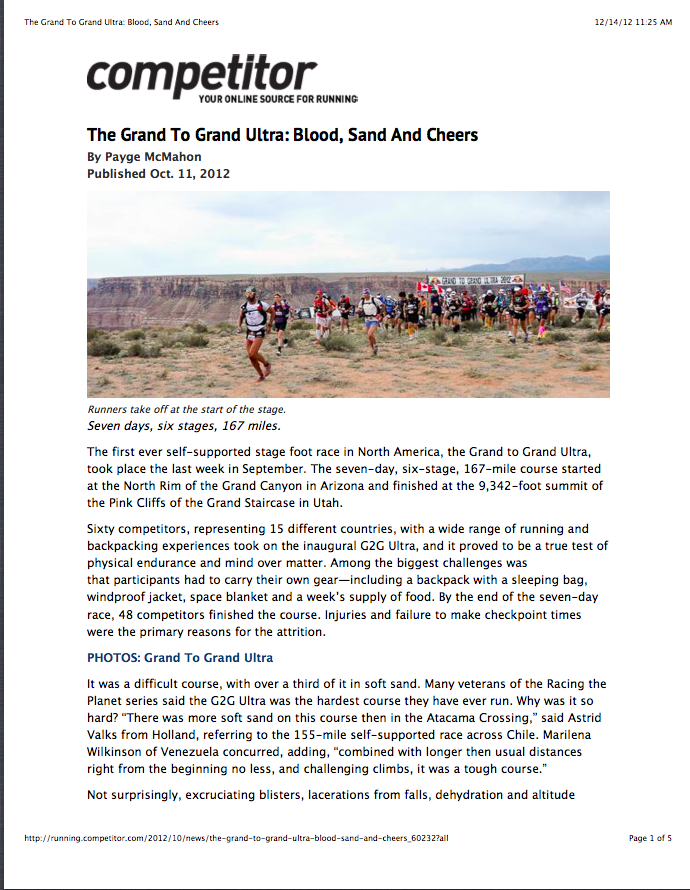 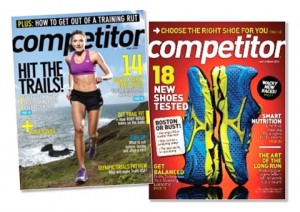 The inaugural G2G Ultra took place from September 23-29, 2012 in the United States.  Starting at the North Rim of the Grand Canyon, the 167 mile course took the competitors through two states, sand dunes, dirt trails, canyons and forests, around Zion National Park and finished at the Grand Staircase in UT.  Sixty competitors representing 15 different countries took part in this incredible adventure. Read how they did and find out why some didn’t finish!

The first ever self-supported stage foot race in North America, the Grand to Grand Ultra, took place the last week in September. The seven-day, six-stage, 167-mile course started at the North Rim of the Grand Canyon in Arizona and finished at the 9,342-foot summit of the Pink Cliffs of the Grand Staircase in Utah.

Sixty competitors, representing 15 different countries, with a wide range of running and backpacking experiences took on the inaugural G2G Ultra, and it proved to be a true test of physical endurance and mind over matter. Among the biggest challenges was that participants had to carry their own gear—including a backpack with a sleeping bag, windproof jacket, space blanket and a week’s supply of food. By the end of the seven-day race, 48 competitors finished the course. Injuries and failure to make checkpoint times were the primary reasons for the attrition.

It was a difficult course, with over a third of it in soft sand. Many veterans of the Racing the Planet series said the G2G Ultra was the hardest course they have ever run. Why was it so hard? “There was more soft sand on this course then in the Atacama Crossing,” said Astrid Valks from Holland, referring to the 155-mile self-supported race across Chile. Marilena Wilkinson of Venezuela concurred, adding, “combined with longer then usual distances right from the beginning no less, and challenging climbs, it was a tough course.”

On the first day and stage, the runners started at the North Rim of the Grand Canyon at an elevation of 5,230 feet. They started at 8 a.m. and had 12 hours to run the 31.5-mile (50.7K) route on dry dirt trail, roads, brush and fields to Camp 1. The temperature rose to 80 degrees during the day.

The first two runners, Salvador Calvo Redondo, 50, of Spain and Stefano Gregoretti, 38, of Italy, crossed the finish line together in 4:59. Caroline Richards, 51, of the UK was the first female to finish in 6:41. Sarah Lavender Smith, 43, was the first American in 6:46, while the last competitor finished in 11:34.

Italy’s Stefano Gregoretti, who has a resting heart rate of 25 beats per minute and spends half the year competing in Ironmans and the second half of the year in ultramarathons, said “it was a little long, but easy.”

On the second day and stage, runners would gain some altitude running through the Juniper trees in the Kaibab National Forest. Again, they would have 12 hours to cross 28.7 miles (46.1K).  Towards the end, runners would get their first taste of the ultra-soft sand that would challenge them for much of the remainder of the course.

A thunderstorm blew in at the end of the day. Rain drenched the slower runners and the sand beneath their feet. Large quantities of sand stuck to their shoes making already tired legs work harder. Four competitors would drop by the end of the day.

Gregoretti and Redondo continued to impress, crossing the finish line together in 5:52. Caroline Richards and Sharon Gayter, 48, of the UK, leapfrogged all day, but in the end Richards finished first again for the women in 7:12.

Runners were allotted 34 hours to compete the challenging long stage of 47.1 miles (75.8K).  It began with a staggered start with the top 11 racers starting an hour later at 9:15 AM.

The trail went straight up the Mansard, gained over 2,500 feet throughout the day, traversed sand dunes and fields of prickly cactus and bushes. While the frontrunners would finish before midnight, many trudged on through a long night following orange glow stick trail markers. A few bunkered down at mile 34 and took on the beautiful sand dunes at dawn.

Seven more competitors would drop out before the end of this stage. The last competitor continuing on, made it to Camp 3  well before the 6 PM cutoff and finished the stage in 29:08.

Frontrunners, Stefano Gregoretti, Salvador Calvo Redondo and Davide Ugolini, 38, of Italy finished in 12:34.  Sharon Gayter would win the stage for the women in 14:31 putting her into first place overall for the women.

It is no surprise Gayter made her move and won the long Stage 3 of the G2G Ultra. A sports scientist at Teesside University in the UK, Gayter uses herself as a guinea pig in testing endurance boundaries and the effects they have on the body. With a gift for running endurance, Gayter has racked up over 22,000 miles in 1,000 races around the world, including 300 marathons and over 100 different types of ultra. She even holds the world record for longest distance run on a treadmill at 517 miles (832K).

After a day’s recuperation, the 25.5-mile (41.1K) Stage 4 began with a beautiful sunrise and views of Zion National Park.

It was a hot day in the low 80s as runners dealt with soft sand for the first mile out of camp but then enjoyed good firm footing until the last leg of 5 miles before the stage finish.  They were treated to cooled air going through a rock tunnel before climbing up steep rocks and out of the canyon.

In their continued alliance and show of sportsmanship, Gregoretti and Redondo, together, crossed the finish line first and into Camp 4 in 5:03. Their cumulative time, 28:30, was nearly two hours ahead of the next competitor, David Ugolini.

A big move came from self-supported, stage race rookie Miranda Jamieson of Canada. She came out from the middle of the pack and won Stage 4 for the women in a time of 5:37, just 49 seconds ahead of the next woman, Caroline Richards.

The 32-year-old Jamieson, who lives in Florida, has been competing in marathons and triathlons since she was 18. When asked where this surge of speed came from, Jamieson answered, “I’ve never done a self-supported stage race like this. My goal when I entered was just to finish. Now that the long stage is past and I have my ‘sea-legs,’ I am ready to run.”

Gayter retained the overall women’s lead, finishing the stage third in 5:52 and with a cumulative time of 34:45. Lavender-Smith held on to second place by 30 minutes, with Richards in third and four minutes behind.

This beautiful 25.7-mile (41.4K) stage included the iconic run through a red rock slot canyon and 1,400 feet of elevation gain by the end of the day.

All bets were off today between Salvador Calvo Redondo and Stefano Gregoretti as the Spaniard made his move in the slot canyon and disappeared down the trail. He finished in 3:55, 52 minutes ahead of Gregoretti and putting himself in first place overall after five stages.

Once again, Miranda Jamieson showed her true speed, winning the stage for the women in 4:51 and fourth place out of all competitors for this stage. Sharon Gayter placed third, but maintained her overall lead after five stages by 26 minutes over second overall woman, Caroline Richards.

One more competitor dropped during this stage.

After 158 miles, only 9 miles (14.5K) and a 2,000 foot ascent on a singletrack trail through alpine woods and doubletrack road remained in this final stage. Another staggered start allowed slower competitors an opportunity to get ahead of the frontrunners. All of the remaining 48 competitors finished strong on top of the Grand Staircase, with views overlooking the Pink Cliffs and and a horizon line that covered much of the course.

Salvador, Stefano, Davide and Canadian John Zahab crossed the finish line together, in a show of great sportsmanship, in 1:44.  Salvador Calvo Redondo of Spain would win the overall competition, completing the entire G2G Ultra in a cumulative time of 34:10.

For the third day in a row, Miranda Jamieson crossed the finish line first for the female frontrunners in 1:46. Caroline Richards came in 9 minutes later, followed by Sharon Gayter. Thanks to her commanding win on the long Stage 3 (the only stage she would win), Gayter was able to retain first in the women’s race. She completed the 167-mile course in a cumulative time of 42:32, only 20 minutes ahead of second-place overall woman Caroline Richards.

The final finisher completed the course in 79:15.

It should be noted that eight out of the top 15 finishers were women, demonstrating an amazingly strong field.

Probably the most inspiring story of the race was South Korean running companions Kyung Tae Song , 51, and KiSuk Song, 46. Kyung is blind. He lost his sight in a grenade explosion when serving in the military in his early 30s. He has completed four desert races and many more. KiSuk, his guide in the Gobi race, led him every step of the way through the G2G Ultra and together they tied for 46th place.

The inaugural Grand to Grand Ultra was not as much about competition but adventure and camaraderie—the bonds that build between people going through a difficult challenge and the lessons they learned about themselves.

Salvador Calvo Redondo summed it up when asked about why he entered the G2G Ultra: “We learn what really gives quality of life are things that are not fixed such as results, numbers or rankings, but rather what is intangible, when all your thoughts break their bonds, your mind exceeds its limits, your consciousness expands in every direction and you see a wonderful new world.”

Registration for the 2013 Grand to Grand Ultra is currently open. There is an Early Bird period until end of October for the first 50 to sign up, each of whom will get a 30 percent discount on the entry fee.