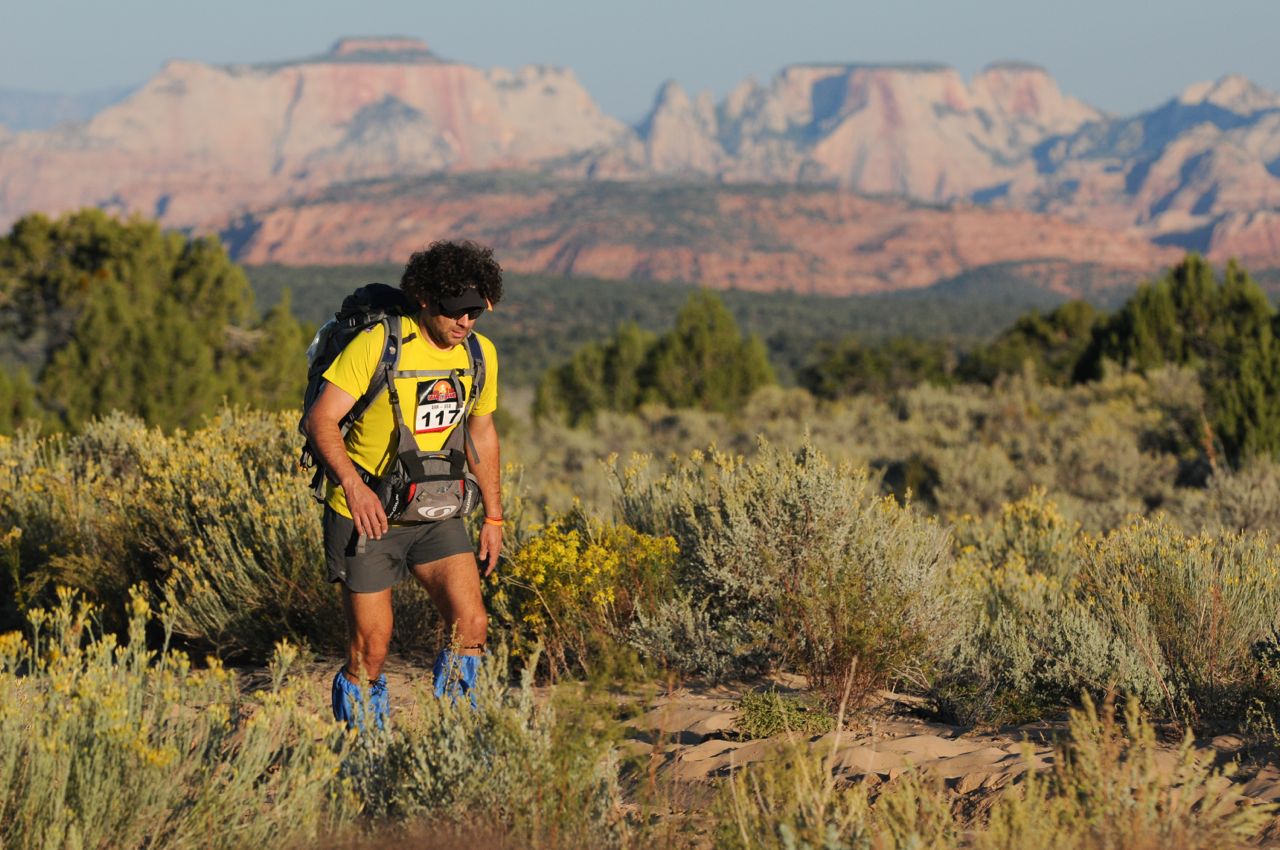 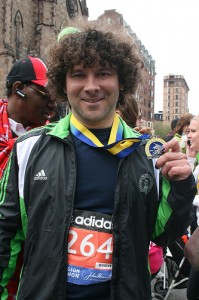 Dan Owings, a train conductor and father from Chicago, ran his first marathon in 2009 at the age of 39.  It was on his bucket list and he figured the marathon would be a ‘one and done’ event.  He did it in 3:20 and qualified for the Boston Marathon. Who does that in their first marathon??

At 5’10” and 170 pounds with a thick mop of curly brown hair and a kind, yet ornery, smile, Dan isn’t built like your typical endurance athlete.  He is toned with a little bit of extra padding in the middle.  He drinks beer the night before a race and doesn’t follow any healthy eating plans.  A self proclaimed, ‘lazy person,’ Dan jests that he breaks as many good running principles as he follows.  He does not cross-train and averages 35 miles running a week.

He believes in ‘quality’ miles, not ‘junk’ miles and runs mostly at tempo with some intervals thrown in for good measure.   When asked why his body took so quickly to endurance running, Dan says, “some of it is genetics, but mostly, it is more in the doing then in the training.” Just do it.

I met Runnerman Dan when we competed in the 2012 Grand to Grand Ultra, a 167-mile, 7-day, self-supported, ultra-stage race last September.  Having to backpack all your food and gear for the week long race, while running up and down sand dunes, mountains and forests’ trails, was a huge challenge. It was the first race of its kind for both of us.  While my strengths were in distance backpacking and mountain climbing, Dan’s was in endurance running.  I would find out the latter is way more important.  Most competitors kept their backpacks under 20 lbs., mine was 19. Dan’s was 30 lbs.  He packed beer and had twice as much food then other competitors.  He smiled and raced all the way to finish 18th out of 60 runners.  As a ‘wanna be distance runner’, I came in 40th and could not have been happier.  It was the hardest adventure I have ever done.

There were many G2G Ultra competitors who intrigued me and Dan was one of them.  Neither of us ‘look’ like endurance runners, though Dan clearly has more talent and unlike me, he genuinely loves to run. As we both prepare to do another 250km self-supported, ultra-stage race this year, I thought it would be good to see what insightful information I could gleam from him.

Payge:  When did you know you were hooked on running?

Dan:  After the first marathon, I realized it wasn’t so bad and decided to do another.  I wound up doing 4 in 5 weeks.

Payge: You qualified for the Boston Marathon running in your very first marathon.  That is crazy!  How did you wind up doing in Boston?

Dan:  By the time I did the Boston Marathon, I was coming back from an injury and had not trained much. I finished it in 3:59.

Payge:  Why do you gravitate towards marathons and ultras? Between the two, which is your favorite to run?

Dan: My body feels more suited towards marathons.  It usually takes 3-4 miles into a race before I feel comfortable and start to get that runners high.

Payge: In a race, do you run intervals or keep the same pace?

Dan: I keep the same pace.

Payge:  In the past three years, you have run 32 marathons.  How many were for PRs?

Payge: What was the most beneficial thing you did to prepare for the G2G Ultra? 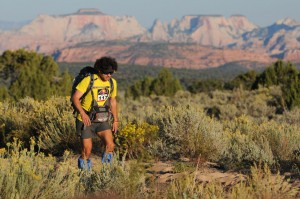 Dan: I had not backpacked since I was a kid, so the most beneficial thing I did during my training was running with a backpack.  I did the Chattanooga Mountain 3 day-60 mile stage race with a pack.  I also did a 50 mile-ultra with a backpack.

Payge: What was your favorite thing about the G2G Ultra race?

Dan:  The incredible views and comradery between competitors, race organizers and volunteers.

Payge:  What was your least favorite?

Dan: It ended.  I would have loved to do it for another week.  Oh, and maybe having to make peace with a lot of sand.

Payge: During a marathon and ultra, what do you consume?

Dan: During a marathon, I alternate between water and Gatorade. I use Shot Blok made by Cliff Bars. In an ultra, same as a marathon, but add some peanut M&Ms, Oreos and Vanilla Wafers.  If fruit is provided I will eat some oranges and watermelon.  Sometimes I will eat deli meat ham.  Some people drink pickle juice.  I’ve tried it and hear the vinegar is good for pH balance.

Payge:  What do you think about when you are running?

Dan:  I think about anything and everything.  My mind wanders. I think about performance and math if I am going for a PR.  I never think, “I want to quit.”

Payge:  Do you listen to an iPod?

Dan: I did when I first started running but have phased it out.

Payge:  What do you take for recovery?

Dan:  I drink chocolate milk.  Since milk was not available during the G2G Ultra, I brought a powdered recovery drink.

Payge: What running shoes do you use?

Dan:  I run in neutral running shoes and love Asics Cumulus.  I do not use any custom inserts.

Payge: Do you have a favorite sock and blister prevention system?

Dan:  I wear normal wicking socks and don’t have a favorite brand. I tried toe socks once and did not care for them.  I don’t use lubrication unless I know my feet will get wet, and then I will put on Vaseline. I rarely get blisters.

Payge: What is your favorite running outfit?

Dan:  I like to wear Pearl Izumi shorts and shirt and sometimes Salomon shirts.  On occasion, I also enjoy running in a Sport Kilt! 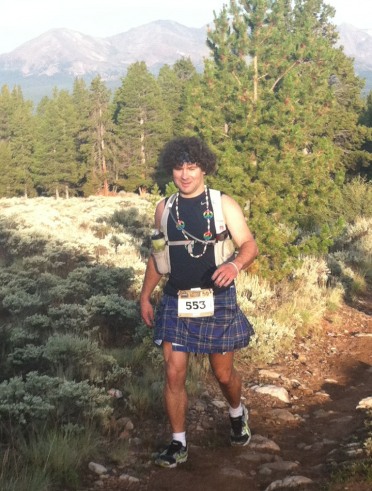 Payge: What are your favorite sunglasses?

Payge:  Do you have a mantra or favorite quote or both?

Dan: “Its just running, don’t overthink it.”  “One foot in front of the other.”

Dan: I would like to set a marathon PR and do another self-supported ultra stage race.  I have my eye on Iceland’s 250km Fire & Ice this August and the 330km Tors des Geants in Italy this September.

For more information or to follow Dan Owings: www.runnermandan.com 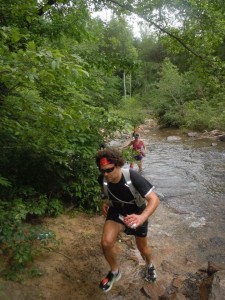 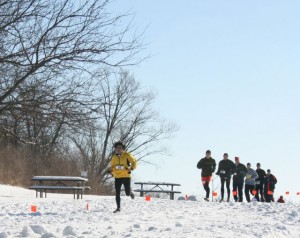