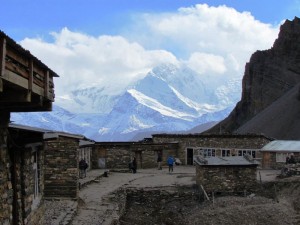 Yaks make me sneeze, goats eat marijuana and the Yeti I saw at High Camp turned out to be a bearded, 6’8” Canadian.

Even with the crowds, yaks, and tall, hairy Canadians you will enjoy this snow-capped mountain, teahouse trek high in the sky!

These are just some of the things I learned on my adventure, solo trek of the Annapurna Circuit, one of the world’s Top 10 Most Beautiful Trails.

What was it like trekking in the Himalaya for 12 days and crossing over 17,768 ft. Thorong La Pass? It was breathtaking in more ways than one. Who wouldn’t enjoy beautiful snow-capped mountains, rushing glacial rivers and rustic teahouse lodging?

Below is my breakdown of the experience and all its fun!

What this trail lacked in remote wilderness, made up for in rustic lodging. This was my first teahouse trek and I actually enjoyed NOT having to deal with a tent. The simple teahouses provided a hiker with a room, a bed with a mattress and a blanket. You shared a bathroom with a squat toilet and often a separate shower. There was no heat and often no electricity, but if you packed right, you managed to keep warm.

Typically a teahouse costs around 100-200 Rupees a night. This is about $2. They make their money from the food you eat and not on the rooms. If you eat enough, many times they won’t charge for the room. 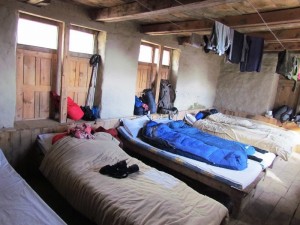 (Video: Payge Gives a Tour of a Tea House on Annapurna Circuit)

Expect to pay between 300-500 Rupees (about $4-$7) a meal and the higher up the mountain, the more expensive the food. Meat like chicken and yak are available on occasion, but more likely the only kind of meat available will be canned tuna. Also, since most items are made from scratch, order at LEAST an hour earlier than you want it and breakfast the night before.

Dal Baht (lentil soup served with rice, potatoes and usually cabbage) is the way to go with free 2nd helpings. Everything else, including pizza, spring rolls (think calzones without tomato sauce) curry and fried noodles were served in generous portions. Hot oat porridge with apples for breakfast was always a good choice.

If you like coffee, tea or hot chocolate and want to save a little money, bring it and they will only charge for the hot water (yes, they charge for hot water!)

Don’t buy bottled water. There are plenty of places to collect water from including rushing streams and faucets. Purify. I used a SteriPEN to ‘ultraviolent ray’ out any bad stuff.

Electrolytes are hard to find once in Nepal but Tang is the next best thing. I recommend you buy Tang and some snacks for extra energy boosts throughout the day. My favorites were granola and Snickers bars.

At times it became like a laughable ‘war strategy’ on the trail. There were a bunch of big adventure travel groups (French, Spanish and Israeli) with 15-20 people in each. If you were a faster trekker, you didn’t want to get behind them and you also wanted to beat them to the small villages to make sure you could get a room for the night.

A small traveling community of new friends develops between trekkers on the trail. I met so many people from all over the world. There were a lot of Israeli’s on the trail as many vacation in the month of October for their New Year’s holiday. I hiked at various times with Canadians, Scottish, British, Irish and French. It is fun meeting new people and hearing their stories.

It took until day 5 to meet another American. After that I met a bunch every day. I especially liked these 4 American women traveling with a couple porters and guide. Their ages ranged from 53 – 66. The 66 year old was their fastest hiker! The oldest person I met on the trail was this American gentleman from Santa Fe. He is 77! He was hiking with 2 other friends with porter/guide support. The youngest, a 16 year old Israeli girl was with her parents. How cool is that?!

It was more common to see a male solo (no porter/guide) hiker versus a female like me. It was never a problem being a solo female on the trail. Everyone was friendly. Locals usually just asked if I wanted a porter/guide.

70% of trekkers had a guide or porter. Most agree that on the Annapurna Circuit, a guide isn’t necessary, but liked having a porter. I would have liked one that first day when I slung on my 40lb Osprey backpack. Ugh! But I was being stubborn and wanted to hike this trail all by myself.

I trekked in 1 set of clothes and had another set for the teahouse. I also brought and wore at various times flip flops, thermals, 3 Canada Goose coats (down, soft-shell and parka), 2 thick pair of Wigwam socks with liners, gloves, Kuhl hat and neck gaiter.

What I packed and didn’t use on the trail was my Thermarest Neoair mattress and poncho. I asked others what they brought yet didn’t use and they said foot gaiters or too many clothes. One Chinese-Canadian, computer programmer brought his laptop INSTREAD of a sleeping bag! He never regretted this decision, even as it got colder. Though he knows he was lucky each teahouse had enough blankets.

I probably could have left the sleeping bag, given the teahouses had blankets, but I would never risk it. Higher up, I still used one blanket with my sleeping bag for extra warmth. It got really cold at night. 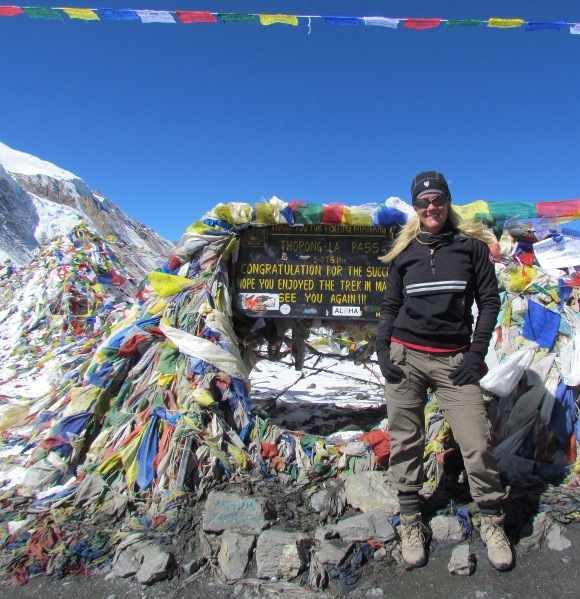 One thing is for sure, you will get high in altitude. The highest point on the Annapurna Circuit is Thorong La Pass at 17,768 feet. It is over 3,000 feet higher than the tallest mountain in the continental United States.

Most people give themselves 2 days the town of Manang to acclimatize before the last few days push to the pass. You can get your heart-rate and blood Oxygen level checked by the American doctors there. Ideally a Blood-Oxygen level over 85% is best. Mine was 92% with a heart-rate of 88 (normal for me is between 55-60). All good, given at the time, I was almost eleven thousand feet above sea-level.

I did not have to use the anti-altitude sickness prescription Diamox. Climb high and sleep low is the creed. When ascending, it is best to sleep no more than 1,800 feet higher than the night before. I took my time and my body acclimatized properly. There were a couple days a little headache came on, but it went away after drinking more water and taking some Advil.

As for other ways to get high…I’m not gonna lie, you will see patches of marijuana growing and though illegal, some trekkers swear smoking a little weed helps the body acclimate. Hmmmmm…..

Going down mountains can be more painful then climbing. I am fortunate not to have any knee problems but met many people who do. There are no means, even with the American doctors in Manang, to have your knee drained. Be cautious, use knee braces and anti-inflammatory pills prescribed.

Food poisoning can happened, and it happened to me on the 7th night. It was after eating a free Yak dinner from the Tourism Board in Manang. I was throwing up all night. Ugh. Felt horrible. I managed the next day to pull myself out of bed and hike an hour and a half to the next town. I had no energy and felt awful. I slept a lot that afternoon. I was back to normal the next day and took the Cipro, I had brought, for a few days just to make sure.

Many trekkers ‘go vegetarian’ on the trail to avoid bad meat.

In the past, the Annapurna Circuit was considered a 300km trek. Now, due to development in the region, most of the 2nd half of the trail shares a dusty, bumpy road and vehicles. Because of this, most people end their trek shortly after passing over the famous Thorong La Pass at Jomsom. The trek is shortened to 140km total, but hey…you did the hard part! The rest is mostly downhill. If you chose to end in Jomsom, take the 20 minute plane ride back to Pokhara. It is worth the trip. Your other alternative is an 8 hour bus, hell ride on a horrible bumpy road.