The Alliance for Women in Media announced the 2013 Gracies Award winners on February 26.  In conjunction with ESPNW, Payge McMahon’s Journeys and Victories episode titled, “Payge McMahon Tackles Her Mother’s Bucket List,” won for Outstanding Web Site – Information/Entertainment. The recipients of the Gracie Awards for excellence in local, online, public and student markets will be honored on June 26, 2013, at the Hilton New York.

The Gracies celebrate and honor programming created for women, by women, and about women, as well as individuals who have made exemplary contributions in online media and affiliates. Presented annually, the Gracie Awards recognize national, local and student works.

To read more about the Gracies: http://thegracies.org/2013-grace-awards.php 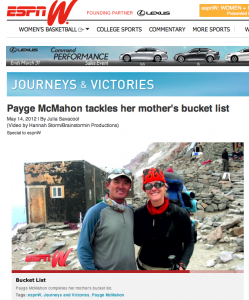