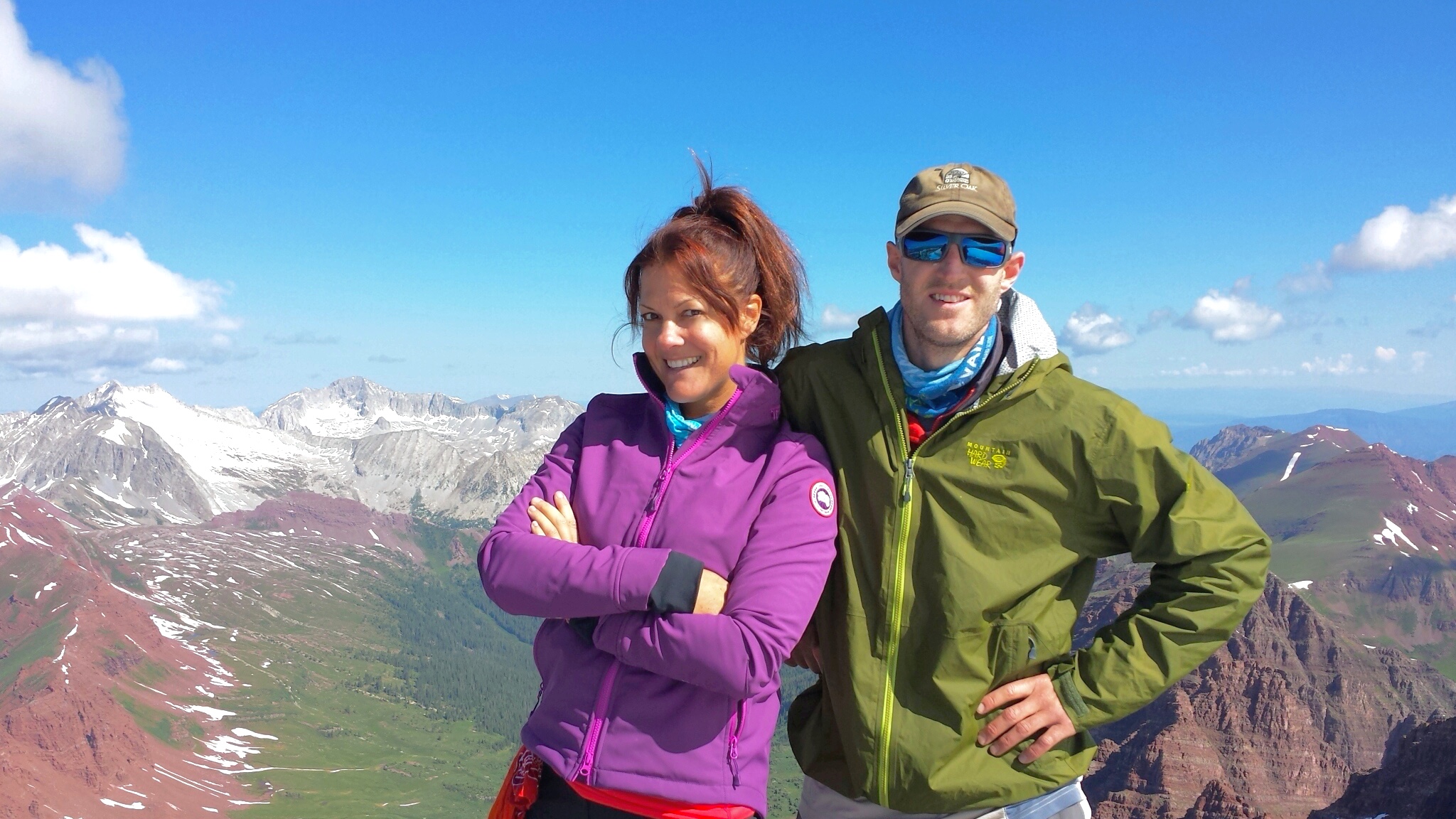 “Because in the end, you won’t remember the time you spent working in the office or mowing your lawn. Climb that goddamn mountain.” ~ Jack Kerouac

The Maroon Bells Traverse is rewarding, but dangerous. It should not be attempted alone, by anyone who has not had actual rock climbing experience, does not have strong upper body strength, stamina or is afraid of heights.

The Traverse is a full-body workout that involves actual climbing.  While we did not use ropes, many other climbers do. One false move or rock slip and you will fall thousands of feet to your death. The Bells are the hardest Colorado 14’ers I’ve ever summited.

My cell phone’s alarm went off at 2 am. Parked on a remote access road, near Aspen, CO, about a 20-minute drive from the Maroon Lake Trailhead, I awoke in the trunk of a rented Kia…well, part of me. My legs were stretched out over the folded backseat.  In my sleeping bag, on top of a Therm-a-Rest sleeping pad, I had slept quite well.

Note: Plan ahead and make reservations at the Silver Bells or Silver Queen campsites in the White River National Forest, or hike to Crater Lake and backcountry camp. 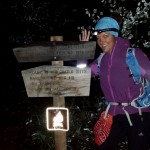 By 3:15am, with headlamps on, Jon Kedrowski, and I were at the trailhead. Starting at an elevation of 9,450 ft., the first 1.8-miles were a nice, gradual, up-hill stroll.

The challenge at night, and it would repeat throughout the day, was spotting trail markers and/or cairns.  You almost have to have ‘bird-dog’ instincts to find them. 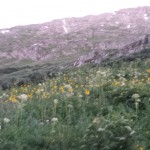 The next part of the hike started by the bent tree intersection, below West Maroon Creek. It is a reality check for those of us used to living at sea level. This section took us through a flower-filled meadow, above the tree line and onto the south ridgeline (at 13,300 ft.). In 1-mile, we gained a grueling 2,800 feet.  In comparison, the famous, thigh-burning Manitou Incline, is the same distance, but gains only 2,000 ft. 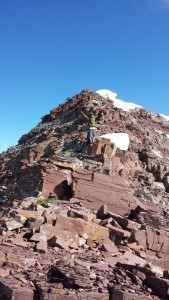 We hiked (and I huffed) across and up the hardened sedimentary, mudstone rock and reached the Maroon Peak summit at 9:30am. It took us (and by us, I mean me) 6:15 hours. Jon, who lives in Vail, has climbed 5 of the 7 summits, including Mt. Everest and all 55 of the Colorado 14’ers…like 20X each. He had to slow his pace down so I could keep up. I’m pretty sure he was a mountain goat in another life. 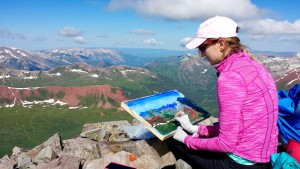 On the way to the summit, we ran into a friend of Jon’s, Lisa Dianne Martin, an artist working on a project where she climbs and paints the views from the summits of all Colorado 14’ers.  She was climbing with Alisa Filer, a physical therapist and ‘Chase’, a solo hiker and college student they picked up in the parking lot. Our team of two happily turned into a team of five.

We spent half-an-hour on the summit.

It was a clear morning and we could see Snowmass, Capital and Pyramid Peaks in the distance. Lush, green spruce and subalpine fir carpeted the valley.

From her big, blue backpack, Lisa pulled out paints, brushes, and a canvas – and proceeded to ‘speed’ paint a beautiful, landscape masterpiece.  It was her 23rd.

The rest of us took pictures, hydrated and consumed a variety of nutritional choices from Honey Stinger chews to Taos Mountain Energy bars, Sour Patch Kids, cookies and fruit.

Anxious of afternoon thunderstorms, Jon pushed us to get moving.  At 10am, we strapped on helmets and carefully descended into the deadly traverse.

The Maroon Bells are named for their distinctive red color and double bell shape. They are unlike any other mountains in the Elk Range and in the Rockies.  Instead of granite and limestone, they are composed of a maroon-clay-colored, metamorphosed, sedimentary mudstone that has hardened into rock.

In 1965, eight climbers died in five separate accidents; from getting hit by falling rocks, grabbing onto loose rock and falling or being struck-by lightning. The media started calling them, “The Deadly Bells.” Since then, on these unforgiving mountains, dozens more have met the same fate. There is little margin for error.

The South to North Traverse 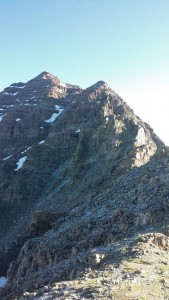 From peak to peak, it is less than half-a-mile, as the crow flies.  Jon cautiously led us down 234 feet, through and then up this dangerous labyrinth. The traverse is on the west side and shaded. This means there are a lot of ice and snow patches, even in the summer. We had to be extra careful not to slip. 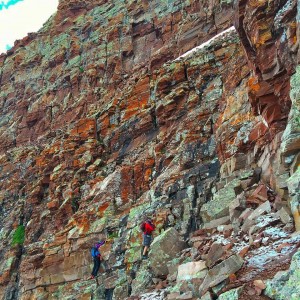 We, newbie ‘Traversers,’ wore climbing helmets, long pants and jackets.  It was cold at these heights (40-50 °F) and the extra protection was needed. If it wasn’t falling rock or banging your head on a massive boulder, because you forgot to look up when climbing…I did this twice…the clothes and helmet minimized inadvertent bumps, scrapes and bruises.

I also wore Ironclad general utility gloves. My hands get cold easily and I wanted extra traction. The gloves have reinforced fingertips, palms and knuckle protection. On these rocks, I was able to grab onto tiny divots and wedge my hands into cracks. The gloves are also ideal for ripping up carpet, tack strips and nails… the original reason why I purchased them last year.

It took every bit of concentration, strength and energy I had to leverage and pull my body up the traverse. I didn’t look down.  I didn’t dwell on being scared or falling. I focused on the next move.

I used to go rock climbing years ago.  Why I stopped, I don’t know? But, this traverse made me realize how much I loved doing it.  It is like solving a very physical puzzle. I made a mental note to join the local climbing gym when I got back to Nashville…and to add pull-ups to my workouts. 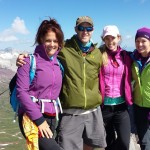 After 1:45 hours of navigating, what seemed like an endless number of deadly pitches, we popped up on the upper-north ridgeline.  A few minutes later, just before noon, we reached the summit.

Exhausted. Excited. Tired. In pain for some of us, we cheered and high fived each other. We had survived and summited our 2nd 14’er that day.

I wanted to stay longer, relax and enjoy the view. I worked hard to get here!

But in the end, I knew the risks. Afternoon thunderstorms are typical in Colorado and any smart climber knows to be up and off a summit by noon. While it was sunny, the wind was picking up and darker clouds were building in the west.

Lisa pulled out another blank canvas and got to work.  The rest of us took pictures, ate, hydrated and signed the summit log, kept in a plastic cylinder, anchored to the rock.

By 12:20pm, Lisa’s newest, mountain masterpiece, her 24th, was drying.  She painted Maroon Peak, the view to our south.

Jon and I agreed to start down climbing just as a sprinkling of hail arrived.  We would search for the safest route and Chase, Alisa and Lisa would follow five minutes later. 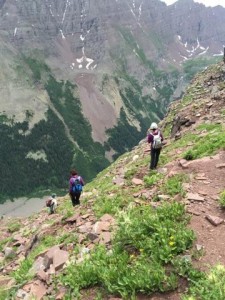 It was steep, rocky and long. The first part involved lots of crab walking, scooting on our butts and some class 3 climbing.  Gradually, the descent turned into an ankle twisting, bone jarring, sharp-turning stretch of switchbacks. I told Jon he needed to learn to paraglide so the next time we could tandem-jump off the summit.  Sure, I could learn, but I’m a terrible driver. Nobody wants me in charge of flying.

Halfway down, we hopped our way across a boulder field, a quarter-mile wide. It led to a meadow with a stream. Refilling our water bottles, we kept moving.

A smaller boulder field followed. It led to a dirt trail, which took us into the forest. We started to see day hikers. The trail kept on going.  Finally, at 3:45pm, we reached the lake and the end of our adventure.  The Maroon Bells Traverse had taken us 12:30 minutes.

I ran the Badwater Cape Fear 51.4-mile ultra-marathon a few months ago.  The group asked me which was harder, ‘The Bells’ or ‘The Ultra?” Without a doubt, The Maroon Bells Traverse was harder.

The night after the traverse, I slept 12 hours straight.  I was dead tired. The next day, my whole body was sore…in a good way. No complaints.

I truly loved the experience and feel a sense of accomplishment for completing it.

I also know that I was lucky to have climbed the Maroon Bells Traverse with someone as experienced as Jon.

Would I do it again?

There are too many other mountains to climb!

** I wore Wigwam King Tube Socks on this adventure.  I could have worn any number of Wigwam socks (Trail Trax Pro, Rebel Fusion, etc…) and they would have worked well. I just really like tube socks! Plus, they protected my ankles from getting nicked by rocks and they kept my calves warm.

NOTE: This article/blog was written by Payge McMahon and orignally posted by Wigwam Mills here.