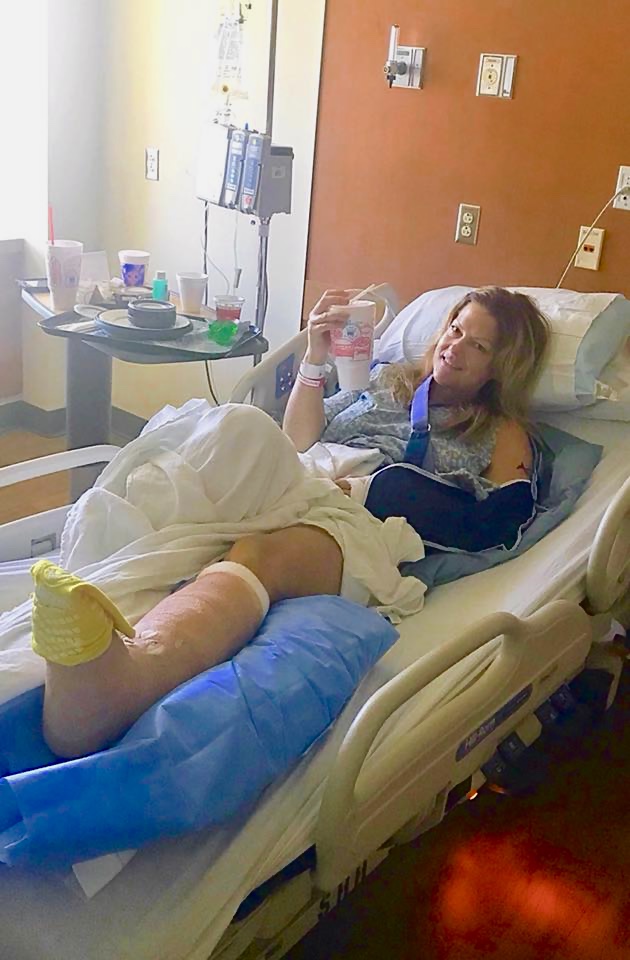 On Wednesday, March 14, 2018, while trimming an oak tree in Florida, I fell. I broke my back in four places, left fibula (leg) in two places, left radius (arm) in multiple places, suffered a lung contusion and to my surprise, found out I had a 9cm tumor on my left ovary.

Whether you’re a risk taker or someone who tends to blow off that inner voice that sets off warning signals, or says, ‘get a second opinion,’ read my story below.

Everything happens for a reason. 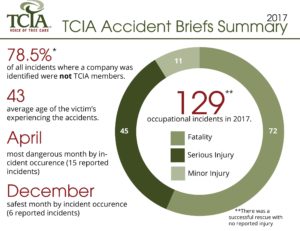 According to the Tree Care Industry Association(TCIA) 2017 accident report, of the 129 occupational incidents, there were 72 fatalities and 45 serious injuries. The three main reasons for accidents; fall, struck-by or electrocution. Like myself, typical fall victims were unsecured and their average age, 43.

Also, like me, there are many people – non-professional tree trimmers – who like to do things ourselves. We tend to be calculated risk takers and 9 out of 10 times are successful in whatever we attempt to do.

You know who you are.

Lesson Learned #1: Stop. Think twice. Never trim trees alone. Use safety equipment – including a harness anytime you are off the ground. When in doubt, don’t do it. Hire a professional. It is not worth it.

My partner, RG’s, 86-year old mother, who lives near Pensacola, FL, asked us to remove a bunch of low hanging branches/limbs over her driveway and house, along with a rotting tree in the back.

Armed with a couple chainsaws, a pole saw, ropes, ladders, gloves, eye protection (we forgot to bring ear muffs), previous tree trimming experience and theoretical knowledge of physics, we got to work.

The first day was great. After six hours, a majority of our mission was completed.

The next morning, RG headed to Home Depot and I stayed behind to work on the yard.

Before he left, we discussed cutting up a tree we had taken down and trimming off a few more oak limbs hanging over the garage. Unfortunately, the pole saw (a chainsaw on an extension pole), we would normally use to remove the high limbs, was having issues and out of commission.

As someone, with a touch of OCD and stubbornness, who probably shouldn’t be left to their own devices, instead of cutting up the downed tree, I decided to figure out how we could tackle the limbs above the garage without the pole saw.

I love climbing trees and knowing RG was not a big fan of heights himself, I resolved to scale the tree and use one of the regular chainsaws to finish the job. I didn’t have a harness, but rationalized that I was only going up 12-15 feet. I’d be fine. Besides, I’ve done this before. It will only take a few minutes.

‘Payge, you should probably wait for RG to get back. It is not wise to climb a tree with no one else around – let alone operate a chainsaw while in said tree. Plus, he could pull the guide-line rope around the limb to aid its fall direction.’

My determination to get the job done, won over the warnings in my head.

I climbed a ladder, stepped onto a branch, calculated the best approach, sat down- straddling a large limb, and got to work.

The first two limbs were easy.

On my left, I was cutting the final limb and was almost finished when, instead of dropping down, it unexpectedly and violently sprang back, towards my chest. I miscalculated the cutting angle. It happened so fast. The limb threw me off – backwards. The chainsaw was in my righthand and I hurled it away. I reached for another branch to stop my descent and missed.

Before impact, I managed to drop my left foot and hand, then THUMP! I landed on my back and everything went black.

“Huhhhhh,” I exhaled, making a hacking sound. Imagine getting the wind knocked out of you and then multiply that times twenty. Excruciating pain radiated through my ribs and back. I couldn’t inhale.

I looked up at the sky. It was a beautiful sunny day. What did I do? 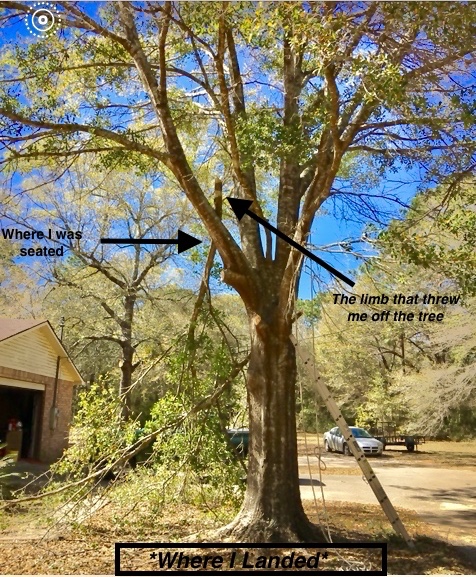 My first instinct, interestingly, was to start a yoga breathing technique – audibly forcing air out and slowly breathing it in through the nose. This would regulate respiration, keep me calm and focused. It worked. Though I couldn’t move yet, I was able to find my breath.

I started to take inventory.

Laying on my back with legs stretched out, my left hand rested on my chest, in an unnatural position. Throbbing, sharp pain shot through it. The same with the left ankle.

Yup, pretty sure they were both broken.

Always one to look at the positive, I whispered, “Thank God, Baby Jesus, Odin, Buddha and Allah!” Pain was good. Not paralyzed.

I then thought, ‘Well, damn! I guess running next month’s Badwater Salton Sea 81-mile Ultramarathon in California is out of the question – and our trip to China.’ I pushed these ridiculous thoughts aside, I had more important things to worry about.

My head, neck, right arm and leg felt fine. I also didn’t see any blood – so I had that going for me.

The left extremities, chest, ribs and back were not fine. They hurt bad. Did I break any ribs? My back? Is there internal damage?

I was alone. My cell phone was in the house, as was RG’s mom.  She couldn’t hear well. I also had no idea when he would return from the store.

Worried about internal damage, I decided I needed to move and get help.

Whenever running an ultramarathon and struggling, I create small goals/make deals with myself. Run three more minutes and then speed walk for one. Repeat. This way, the whole task doesn’t feel so overwhelming.

I looked at this situation the same. If I can move, try to crawl. If I can crawl, try to stand. If I can stand, try to walk. From the tree, make it to the driveway. Then the garage and into the house. Maybe fifty feet. Small goals.

Focusing on breathing. Ignoring the pain, fifteen minutes after falling, I rolled to the right and onto all fours – well, all three. The left hand was not moving anywhere.

I crawled five feet, over to the chainsaw, and turned it off. Yes, it had continued to run after I threw it. A well-built chainsaw, I was damn lucky not to have fallen on it.

Next, I made it to the ladder and with the right hand, pulled myself up, wobbling, to a standing position, dizzy and light headed.

Dragging the left leg, painfully and slowly I trudged forward – checking off those small goals.

I entered the house, through the garage door, into the kitchen, to the phone and called RG.

“Please don’t be mad. I fell. I’m hurt bad and need to go to the hospital,” I told him.

“Do you need an ambulance?” He asked.

“No. Probably. I want you to take me” I answered.

RG raced home and gingerly loaded me into the reclined front seat of his truck. Thankfully, only a five-minute drive, we arrived at Santa Rosa Hospital’s Emergency Room entrance.

He sweetly and reassuring said, “Baby, stay here. I’m going to get help.” He ran inside.

The next thing I knew, hospital staff were all around me. I had a neck brace on and was loaded from the truck, onto a board, gurney and rushed into the trauma unit. Clothes were cut off, an IV put in, morphine, x-rays, a full body CT scan and then, due to the extent of my injuries, I was wheeled into an ambulance and transferred to (a bigger hospital) Sacred Heart in Pensacola, FL.

Lesson Learned #2: Yoga & Endurance Running May Save Your Life 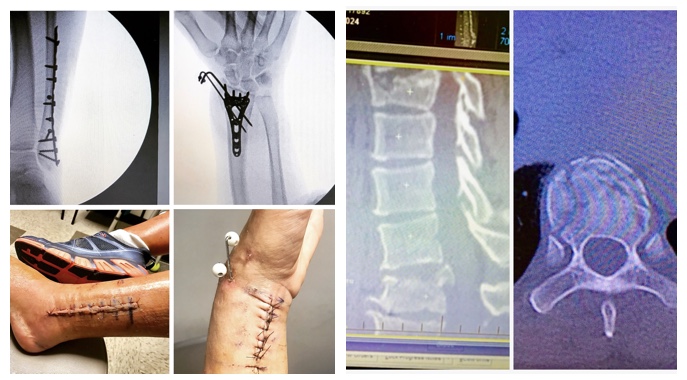 Shocked to hear my back was broken in four places, I was more surprised and concerned about the tumor. I just had the annual exam with my gynecologist the week before. How did he miss something the size of an avocado? 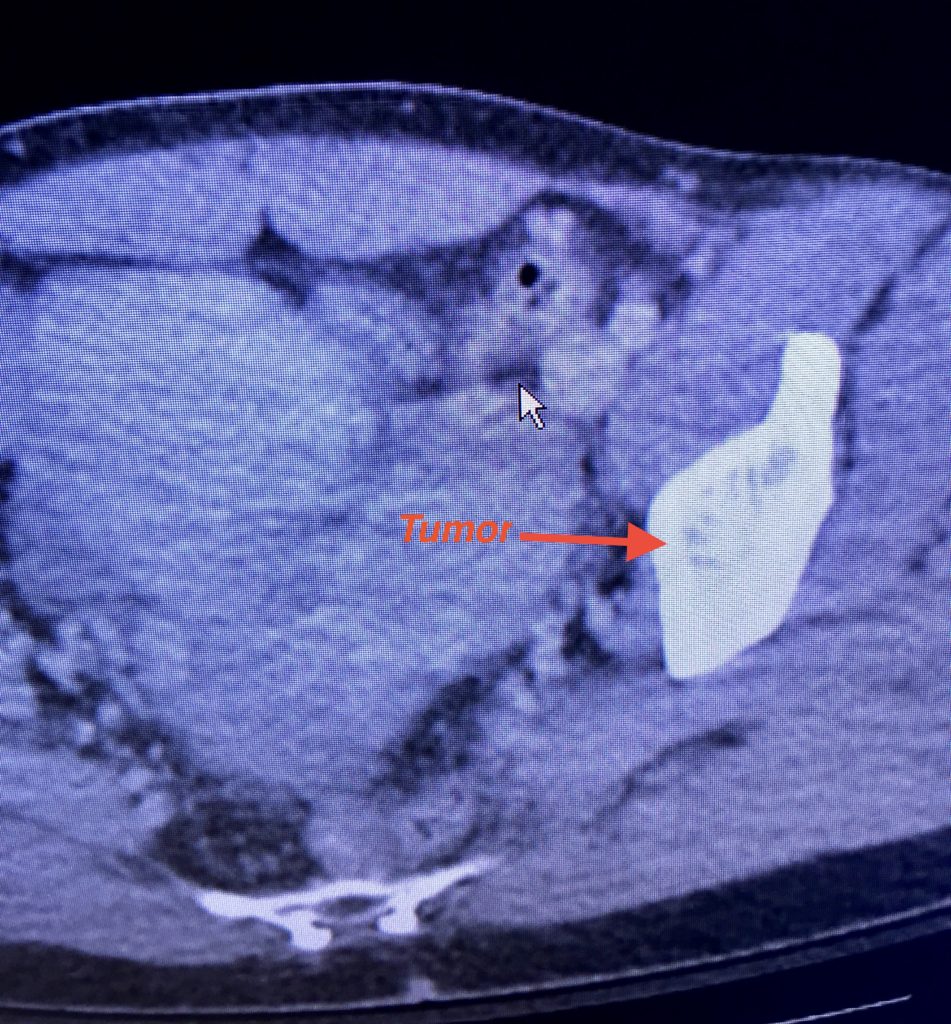 Did I have cancer?

My great aunt died from ovarian cancer and my mother, at the age of 55, had a hysterectomy, because of a large fibroid tumor in her uterus.

Ever since I turned forty, I had a gut feeling (no pun intended) that I should get a second opinion about this area – just to be safe. But I never did.

Lesson Learned #3: When in doubt, get a second opinion. 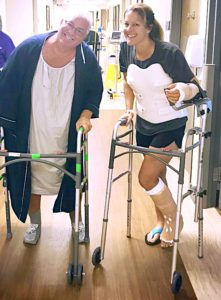 I would spend the next 5 days in the hospital.

Surgery was done on my left wrist and ankle and they were put in casts. I now have titanium plates and screws keeping those bones together.

A pelvic ultrasound was inconclusive in determining if the mass was a pedunculated fibroid or an ovarian stromal tumor. When I returned to Nashville, I would need to find a new gynecologist and have it removed.

The doctors said the compression fractures nearly paralyzed me. Had I not thrown my left foot and hand down first, before my back impacted with the ground and had I not been in good shape (muscles tensed up around the spine to protect it), I would not be walking.

I received a customized clam shell body brace and a platform walker. I would need to wear the brace and keep weight off my left leg for the next 8-12 weeks. Gingerly, I hopped out of the hospital on the fifth day. 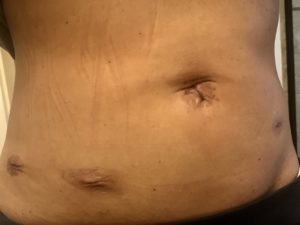 On April 17th, my new gynecologist performed a laparoscopic myomectomy. Four 1-inch incisions were made in my abdomen, including the bellybutton, to remove a large pedunculated fibroid attached to, and on the outside of, my uterus. Biopsy results came back negative for cancer.

Cancerous or benign, had I not fallen, when would I have learned about the large mass growing inside me?

Am I lucky or unlucky? 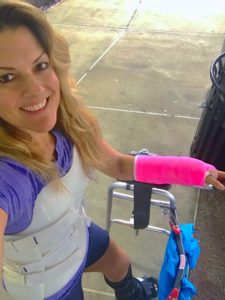 This is also the second time I’ve broken my back. Who breaks their back twice in one lifetime – and walks away from both?

The first time was a lumbar compression fracture from a car accident in 1990. I was 16-years old and spent 2 weeks in the hospital. Doctors put a fiberglass body cast on me and I was bedridden for a month. Afterwards, I wore a metal back brace for three more months. Chronic back pain became a new normal, but I would walk and later run.

That experience taught me a lot about life, perspective and being thankful. I learned to focus on the things I can do and go from there. 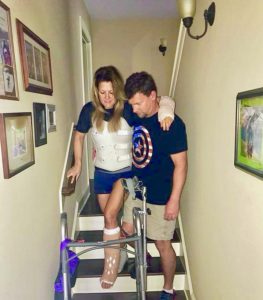 Lesson Learned #6: Focus on the things you can do and go from there.

Lesson Learned #8: Everything happens for a reason.