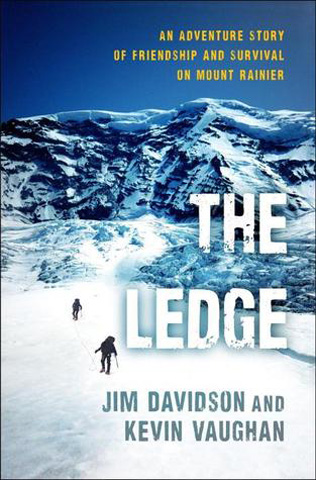 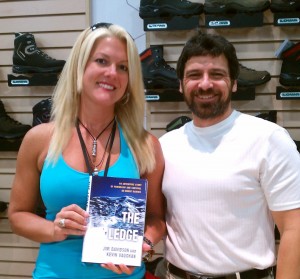 Author, motivational speaker and mountaineer, Jim Davidson and I recently sat down to discuss his new book, The Ledge-An Adventure Story of Friendship and Survival on Mt. Rainier.

It is a gripping real life account of two friends, Jim and Mike Price, both experienced climbers, summit of 14,410 foot, Mount Rainier via the challenging Liberty Ridge route on June 21, 1992. As they descended the Emmons Glacier, without warning, a snow-bridge collapsed beneath Jim’s feet and dropped him into a huge, hidden glacial crevasse.

As Jim plummeted, Mike tried to stop him but couldn’t. The two friends dropped 80 feet into the glacier and were buried by falling snow. Mike did not survive.

Buried in snow and trapped in the crevasse, Jim was alone. Devastated at the loss of his friend, Jim was surrounded by ice and fear. Jim had to climb the frozen, overhanging walls of the crevasse, or die trying. ~ The Ledge

I have to say, I was HOOKED on this book after reading the first sentence, ”I peered off the ledge into blackness.”  As a fellow climber, what Jim went through is every mountaineer’s worst nightmare.  I can’t even imagine… 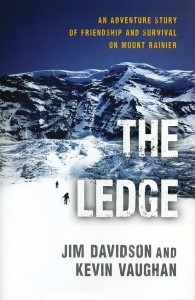 Payge:  Jim, how old were you when the accident happened in 1992?

Payge:  What was it like writing this book with co-author Kevin Vaughn?

Jim: It took us 2 & ½ years to complete The Ledge. Shortly after the accident, I sat down and made hours and hours of tape recordings, just talking about what happened.  I was still in shock and needed to process things, especially the loss of Mike. It was years later that I met Kevin, a reporter for the Denver Post, and we decided to write the book together. We went back and forth so much, neither of us could probably tell you who wrote what chapter by now. It was a long process.

Payge: Was it hard writing the book, reliving everything over again?

Jim:  Distance and time have helped. The wound is still there though. I wanted to honor his memory, it is a story that should be told and I felt it would help others.

Payge:  What are the 3 things you learned the most from the accident?

Jim:  The first thing is how resilient we are as human beings.  The second is reaffirming the commitment you have to your partner, either in life, work or play. It was something my Dad taught me when we worked together painting tall buildings, bridges and etc.  When you are belaying someone you are connected to with a rope, and they are high up on a pole or wherever, their life is in your hands. Dad always said, “No matter what, never let go!”  The third lesson I learned is that you can rebuild your life when something bad happens.  Don’t quit living. This transcend though any difficult time.

Payge:  Have you continued to climb mountains?

Payge:  I wish you the best of luck! You will do great.

Payge: On a lighter note, when climbing, we all know altitude plays around with our appetites’.  What do you crave when on the mountain?

For more information on Jim Davidson or The Ledge: http://www.speakingofadventure.com/the-ledge/